© 1996-2020, Gopalan Suresh Raj. All rights reserved.
All products and companies mentioned at this site are trademarks of their respective owners.

In this book, I authored the following chapters:

The JMS (Java Message Service) API (Application Program Interface) is a strategic technology for J2EE that provides a reliable, flexible service for the asynchronous exchange of critical business data and events throughout an enterprise - between computers rather than between users. By combining Java technology with enterprise messaging, the JMS API provides a new, powerful tool for solving enterprise computing problems. The JMS API adds to this a common API and provider framework that enables the development of portable, message based applications in the Java programming language. As a result enterprise messaging is now recognized as an essential tool for building enterprise applications. 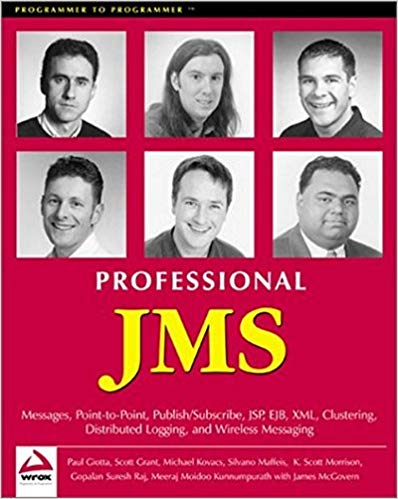 This book shows how you can use the Java Message Service (JMS) to create robust, asynchronous, loosely-coupled Java applications. It covers both the fundamental and advanced features of the latest 1.02 API, in both the Point-to-Point and Publish/Subscribe messaging domains. With JMS provision becoming mandatory in the next generation of J2EE 1.3 application servers, this book will prepare you for building portable, messaging-enabled web and middle tier solutions, including the use of the new message-driven EJBs. It also covers the emerging uses of messaging in the mobile domain, and the strong relationship that is building between new XML messaging standards, and small footprint JMS clients. Finally, the book also provides a practical guide to the use of JMS against many of the leading messaging vendors available, including among others FioranoMQ, WebLogic, and iBus//MessageServer.

This book is for professional Java developers who need to add enterprise messaging capabilities to their applications. No knowledge of JMS is required but it is assumed that the reader is familiar with Java and preferably with the enterprise APIs of JNDI, JSP and EJB, as well as some knowledge of XML.

Gopalan Suresh Raj is a senior analyst, software architect, and developer with expertise in multi-tiered systems development, enterprise component architectures, and distributed object computing. He is also an active author, including contributions to Enterprise Java Computing-Applications and Architecture, Cambridge University Press, 1999, and The Awesome Power of JavaBeans, Manning Publications Co., 1998. He has submitted papers at international fora, and his work has been published in numerous technical journals. Visit him at his popular Web Cornucopia website or mail him at gopalan@webcornucopia.com.

Scott Grant is a Chief Architect with CascadeWorks, Inc., in San Francisco, California, and has over fifteen years of diverse development experience. An independent consultant for many years, he has been a successful founder of two start-up companies, where he has helped to build and shape the engineering teams and environments. A Sun Certified Java Developer, Scott has published numerous technical articles on Java programming subjects, and enjoys working with emerging Java standards and technologies.

Paul Giotta holds degrees in electrical engineering from both Rensselaer Polytechnic Institute and the Swiss Federal Institute of Technology. He began his career in the field of R&D for advanced military radar systems at AIL Systems in the US. He later moved to Switzerland and took up work in the development and implementation of financial analytics for the trading of fixed income derivatives at Credit Suisse. Paul ultimately entered the field of software engineering full time when he began work on the architecture and implementation of real-time distributed trading systems (based entirely on Publish/Subscribe messaging) at CS. He later moved on to the development of financial information systems at Olsen & Associates and also worked as an IT consultant for Cambridge Technology Partners. Paul is now chief architect for message servers at Softwired AG in Zurich.

Michael Kovacs is a Sun Certified Java 2 Programmerand has been working in Java for the past 3 years. He has worked on all aspects of web based software development from the browser to the database. He has recently joined BEA Systems in San Francisco, CA as a Senior Software Engineer working with the Weblogic team. Before joining BEA he relocated last spring from his home in Cleveland, OH to San Francisco to work for Carstation.com, which is inspired this book’s work. In his previous programming life he was a C programmer who started out writing software for lottery systems. He has a Bachelors degree in Electronic Engineering Technology from The University of Dayton.

K. Scott Morrison is the Director, Architecture and Technology, for Infowave Software. He is currently leading a number of teams confronting the challenges in opening corporate data stores to an ever-increasing variety of wireless devices. He is a frequent and very popular speaker on topics in XML, Java, and wireless system architectures. Prior to his joining Infowave, Scott was the Senior Architect in the e-business division at IBM’s Pacific Development Centre. While at IBM, his focus was on building high-volume, high-transaction rate web systems for travel and transportation, as well as designing and auditing Internet security architectures for government and financial sector clients.

Scott began his career by spending eight years involved in medical imaging research at the University of British Columbia. Here, he worked on Positron Emission Tomography (PET) brain scanner design, produced educational CDROMs about Alzheimer’s disease for physicians, and conducted original research into neurodegenerative disorders. He has been published extensively in leading journals in medicine and in physics. He has also been a consultant on a number of feature film and television productions. Scott’s current research interests lie in enterprise XML messaging architectures, Java/XML integration, and development frameworks for wireless systems.

Silvano Maffeis is CTO at Softwired, a leading vendor of Java messaging middleware for wireline and wireless networks. Silvano holds a Ph.D. in computer science and is the author of numerous publications about Java software development, middleware, and wireless communication.

The book has an appendix (Appendix A) which shows you how to switch between different message servers and has illustrations for:

Gopalan Suresh Raj is a Senior Analyst, Software Architect, and Developer with expertise in multi-tiered systems development, enterprise service architectures, and distributed computing. He is also an active author, including contributions to Professional JMS Programming, Wrox Press, 2001, Enterprise Java Computing-Applications and Architecture, Cambridge University Press, 1999, and The Awesome Power of JavaBeans, Manning Publications Co., 1998. He has submitted papers at international fora, and his work has been published in numerous technical journals. Visit him at his Web Cornucopia© site (webcornucopia.com) or mail him at gopalan@webcornucopia.com.